Around the World with Peanuts

If you love international food, you probably won’t be surprised to know that in just about every country around the world, peanuts and peanut butter have found dishes to call home—from satays and sauces, to stir-fry and salads. That includes places like Africa, the Mediterranean, the Middle East, India, Central and South America, and the Far East.

(Feel like taking your taste buds on a trip of healthy world cuisine? Check out our blog on peanut dishes from around the world!) 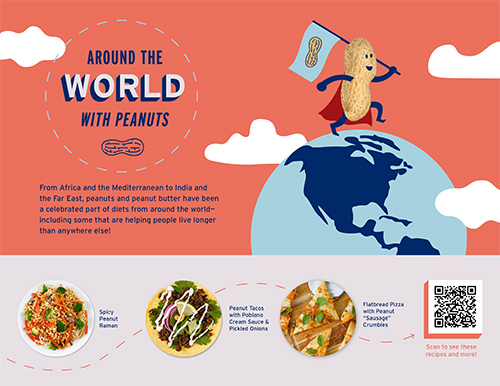 And who could blame them? Because ounce-for-ounce, peanuts provide one of the most impressive arrays of affordable nutrition you’ll find in any whole food around the world:

Hungry for More Food Around the World?

But it’s not just the taste, nutrition and affordability of peanuts and peanut butter that have gained them worldwide popularity—it’s also the health benefits they bring to traditional diets.

Including some diets that are helping people live longer than anywhere else on earth!

Blue zones are regions of the world where life expectancies are extraordinarily higher than average, with a high quality of life.

One of their discoveries was that residents of all of these places had specific meal habits with a common theme: a mostly whole food and plant-based diet, with beans and legumes (like peanuts) providing much of their protein.[2]

This International Food is Beneficial Anywhere

If you don’t happen to live in one of these locations, don’t worry! Peanuts still offer big benefits no matter where you live.

Reduce Cancer Risk: Diets that emphasize plant-based foods like peanuts have been found to be protective against cancer.[4,5] On top of that, peanuts contain high amounts of phytochemicals—some of which block the activation of cancer-causing substances and enhance your immune system.[6] Peanuts also contain resveratrol, which is a potent antioxidant that’s shown to be protective against brain, skin, stomach and pancreatic cancers,[7] as well as phytosterols, which can inhibit colon, breast and prostate cancer cells.[8]

Reduced Heart Disease Risk: Eating peanuts daily has shown a strong association with a decreased risk of heart disease, myocardial infarction, and sudden death—with authors of one study linking the benefits to peanuts’ unsaturated fats, l-argenine, phenolic compounds and phytosterols. They also highlighted that an “estimated 8.3% reduction in risk from coronary heart disease death ensues from each weekly serving (about 30g) of nuts.”[9] (Learn more about the heart healthy benefits of peanuts in our blog!)

Protect Against Diabetes: Diabetes can dramatically impact life expectancy if left unmanaged. Peanuts and peanut butter are low GI (glycemic index) foods that contain healthy oils, protein and fiber, which have a positive effect on blood sugar control. Studies have also shown eating peanuts or peanut butter at breakfast can prevent blood sugar “spikes” that can cause you to “crash” later in the day,[10] while choosing plant-based protein over meat can help prevent the development of type-2 diabetes.[11]

Boost Your Brain: Functional compounds in peanuts and peanut butter have been shown to boost memory, strengthen cognition, protect against cognitive disease (like Alzheimer’s) and more.[12] (Discover more ways peanuts can support your brain health in our blog.)

The Worldwide Appeal of Peanuts in All Types of Cuisine

When it comes to international cuisine, peanuts aren’t just one of the most popular foods in the world—they’re also one of the most nutritious, affordable and beneficial. Plus, they’re such a flexible ingredient, you’ll find they go great with just about anything. Especially good health!

And who isn’t hungry for more of that?