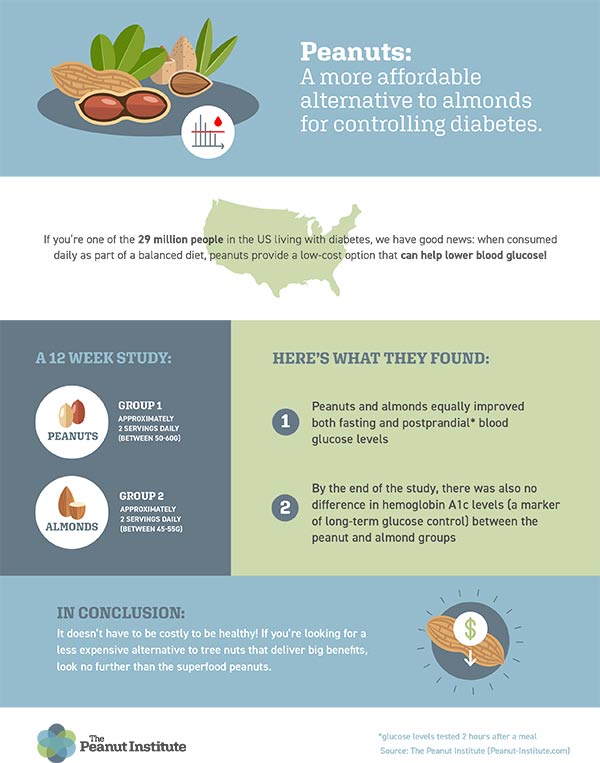 Albany, Ga. (November 1, 2018) – If you thought almonds were healthier than peanuts, think again. A study published in the journal Nutrients in October 2018 found that peanuts are just as good as almonds for lowering blood glucose levels in diabetic patients.

“Research has shown that eating nuts is beneficial for type 2 diabetes,” says Dr. Samara Sterling, director of research for The Peanut Institute. “This new study highlights that people can choose peanuts as a low-cost option to get the same benefits that they would from a more expensive nut like almonds. In fact, the American Diabetes Association considers peanuts a superfood.”

The recent study sought to compare the effects of either peanut or almond consumption on health in patients diagnosed with type 2 diabetes. Twenty-five participants were fed a low-carbohydrate diet for 12 weeks and were placed in one of two groups: the Almond group or the Peanut group.

All participants were instructed to consume approximately two servings of peanuts or almonds each day. By the end of the 12 weeks, they all showed significant improvement in various measures for diabetes. However, the authors of the study found that almonds were no better than peanuts for improving glucose levels. In fact, peanut consumption improved both fasting blood glucose and postprandial glucose (glucose levels tested two hours after a meal). By the end of the study, there was also no difference in hemoglobin A1c levels (a marker of long-term glucose control) between the Peanut and Almond groups.

The authors noted that while nuts are routinely recommended for controlling type 2 diabetes, it is not always possible for many patients to consume tree nuts due to their high cost.

Peanuts are a low-cost option that can help to lower blood glucose if consumed daily as part of a balanced diet. This is good news for the 29 million people in the United States suffering from type 2 diabetes. With the rising cost of medications to control this condition, it is reassuring to know that eating healthy does not have to be costly too.

In fact, eating peanuts may even contribute to reducing insulin needs over time, which is an added benefit. Peanuts have a low glycemic index of 14, which prevents spikes in blood sugar and in turn reduces insulin needs. A previous study demonstrated that when peanuts or peanut butter are included in a high glycemic load meal, they keep blood sugar stabilized so that it does not rise too quickly. In addition, a 2014 study found that daily consumption of peanuts enriched the American Diabetes Association meal plan and improved blood lipids as well as vitamin E, niacin and magnesium levels of participants.

Wien, M., K. Oda, and J. Sabaté, A randomized controlled trial to evaluate the effect of incorporating peanuts into an American Diabetes Association meal plan on the nutrient profile of the total diet and cardiometabolic parameters of adults with type 2 diabetes. Nutrition journal, 2014. 13: p. 10-10.

Dr. Samara Sterling is a Nutrition Scientist with expertise in the use of plant-based nutrition for the prevention and treatment of chronic diseases. She currently serves as the Research Director for The Peanut Institute and has also worked as a nutrition consultant for various community-based nutrition projects. She holds a bachelor’s degree from Stony Brook University, a master’s degree from Andrews University and a Ph.D. from the University of Alabama at Birmingham.