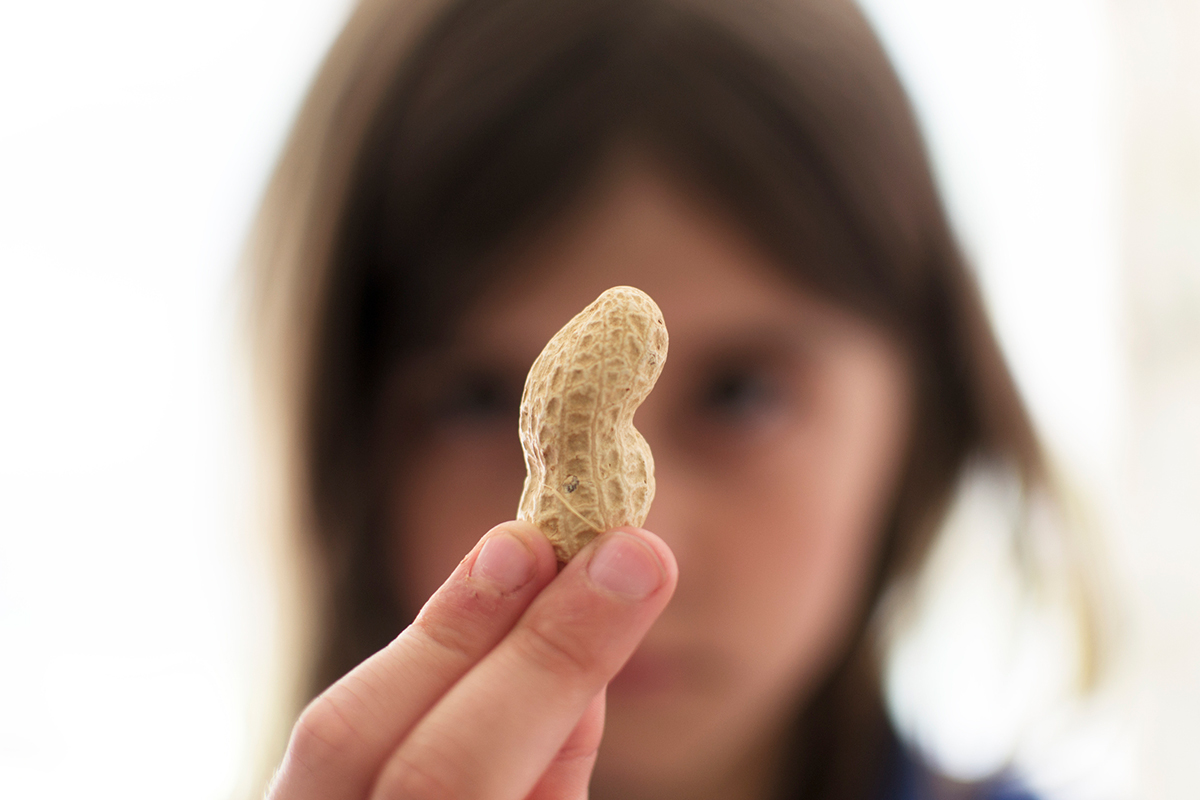 Why Are People Allergic to Peanuts?

An allergic reaction is caused by a dysfunction in the immune system. Individuals may experience allergic reactions to foods, insect stings, latex, and a variety of environmental exposures. A food allergy reaction involves the immune system and occurs when a typically safe substance in foods, usually a protein, mistakenly triggers the body’s protective immune response. Reactions can range from mild to severe. The true prevalence of food allergies is not known.

Fortunately, most allergic reactions are not life-threatening, but any food allergy reaction can be severe and unpredictable. Reactions can range from hives that quickly go away on their own to a reaction called anaphylaxis that may involve the respiratory and cardiovascular system and can be life-threatening. The only recommended treatment for anaphylaxis is epinephrine. For more information on treating a food allergy reaction, speak with your pediatrician or physician.

What is a Peanut & Peanut Butter Allergy?

A peanut allergy occurs when a person’s immune system does not recognize peanut protein and mistakenly overreacts to it. Both genetic and environmental factors appear to be involved. The groundbreaking LEAP Study (2015) found that the introduction of peanuts into an infant’s diet, prior to 11-months old, reduced the prevalence of peanut allergy significantly. As a result of the LEAP study, new guidelines have been released to encourage early introduction of peanut foods. Research has shown that introducing peanut foods early to those infants who are at high risk reduced rates of developing peanut allergies by up to 86%. Implementing early introduction will hopefully reduce the prevalence of peanut allergies for future generations.

Family history, occurrence of eczema-type skin rashes, and exposure to soy protein were associated with the development of peanut allergy in childhood in one study, but there is no clear cut answer as to why one child ends up with a peanut allergy and another does not. Both genetic and environmental factors seem to be involved.

What is Peanut Sensitivity

For expectant mothers, limited evidence suggests that eating peanuts during pregnancy may help to reduce the risk of a peanut allergy in the child. The Growing Up Today Study (GUTS) examined 10,907 children whose mothers provided dietary information while they were pregnant and within one year of pregnancy. Peanut allergies were significantly lower in the children of 8059 nonallergic mothers who consumed more peanuts than those who did not. More evidence is needed in this area. Maternal peanut consumption during pregnancy or lactation had no effect on developing allergy in one study, nor did duration of breastfeeding.

In those who are especially sensitive, reactions to peanuts can occur from ingesting just a trace amount. This can cause anxiety, especially for the parents of peanut-allergic children. However, research shows that touching, smelling, inhaling airborne particles or just being near peanuts is highly unlikely to cause a severe reaction (Simonte SJ, et al. Relevance of casual contact with peanut butter in children with peanut allergy. J Allergy Clin Immunol. 2003 Jul:112 (1): 180-2.)

Smelling the aroma of peanuts is not the same as inhaling airborne peanut particles that could potentially contain the allergenic protein. The aroma of peanuts comes from different compounds that cannot cause an allergic reaction. Also, highly refined peanut oil is not required to carry allergen labeling because the process used to purify the oil removes the protein, thereby making it no longer allergenic.

In one controlled study, 30 children with significant peanut allergy were exposed to peanut butter, which was either pressed on the skin for one minute, or the aroma was inhaled. Reddening or flaring of the skin occurred in about one-third of the children, but none of the children in the study experienced a systemic reaction.

To prevent an allergic reaction it is essential to avoid eating the allergenic food. Here are some tips to minimize the risk of being exposed to allergens:

Evidence does not support the effectiveness of food allergen bans. In fact, many experts feel that food bans, except in situations that involve very young children such as in daycare centers, give a false sense of security. Peanut bans, for example, ignore other potentially serious food allergies. School-aged children need to be prepared to understand real-world environments. An approach that includes preparedness and training of faculty, school food service personnel, parents and students on how to manage food allergies is thought to be the most effective approach.

A number of therapeutic interventions to treat peanut allergy are currently being studied. Among these are an oral immunotherapy (OIT) study for desensitization (including the PALISADE trial) which was published in the New England Journal of Medicine November 18, 2018. Oral immunotherapy induces the body’s immune system to tolerate a food that it is currently overreacting to. This is done by consuming extremely small quantities of the allergen on a regular basis, in gradually increasing amounts. Previous randomized, controlled clinical trials have provided evidence that daily peanut OIT can reduce the severity of allergic reactions to peanuts. Over 77% of participants in the study were able to tolerate 300mg of peanut protein which resulted in a significant increase in tolerance.

Epicutaneous Immunotherapy (EPIT) sometimes referred to as the “patch” has shown itself to be safe and effective in peanut allergic participants. At this time, these treatments are considered investigational.

What Causes a Peanut Allergy and Allergic Reactions to Peanuts?

The science is not clear as to what causes peanut allergy. Both genetic and environmental factors appear to be involved. The groundbreaking LEAP Study (2015) found that the introduction of peanuts into an infant’s diet, prior to 11-months old, reduced the prevalence of peanut allergy significantly. As a result of the LEAP study, new guidelines have been released to encourage early introduction of peanut foods. Research has shown that introducing peanut foods early to those infants who are at high risk reduced rates of developing peanut allergies by up to 86%. Implementing early introduction will hopefully reduce the prevalence of peanut allergies for future generations.

Since peanut oil is pressed from peanuts, some have questioned if peanut allergic individuals will react to peanut oil. This question has confused many who would like to enjoy a Sichuan stir-fry, deep-fried turkey, or other foods cooked in peanut oil.

The FDA Food Allergen Labeling and Consumer Protection Act of 2004 and the Federal Food, Drug, and Cosmetic Act (FFDCA) indicate that highly refined oils are not major food allergens.

The Federal Food, Drug, and Cosmetic Act states:
“(qq) The term `major food allergen’ means any of the following:

Unrefined, “gourmet,” “aromatic,” or cold-pressed oils may still contain proteins that cause allergy. They can also be referred to as “crude” oils. The use of these specialty oils is limited; however, it should be recognized that not all available peanut oil is highly refined. If an allergic individual is unsure as to whether a product contains or was fried in highly refined peanut oil, that individual should ask the manufacturer or restaurant for clarification.

According to Food Allergy Research & Education (FARE), “Highly refined peanut oil is not required to be labeled as an allergen. Studies show that most people with peanut allergy can safely eat this kind of peanut oil. If you are allergic to peanuts, ask your doctor whether you should avoid peanut oil.

But avoid cold-pressed, expelled or extruded peanut oil—sometimes called gourmet oils. These ingredients are different and are not safe to eat if you have a peanut allergy.”

How many people have food allergies?

What about peanut allergies?

It seems like more people have peanut allergies, why?

Are all peanut allergies severe?

What is the allergen in peanuts?

What about peanut oil?

See more by downloading the fact sheet on peanut allergy.

Or, to download the full White Paper on Peanut Allergy.

For the latest research and information on managing peanut allergies, please visit peanutallergyfacts.org.

The FDA is currently testing a unique Chinese herbal formula called “Food Allergy Herbal Formula-2,” which may prevent anaphylactic reactions following the treatment. (9) “Anti-IgE therapy” is showing promise, which increases the threshold of sensitivity to peanut allergens. (10) Also, the blocking of different hormones involved in anaphylaxis is currently being tested in mice. (11)