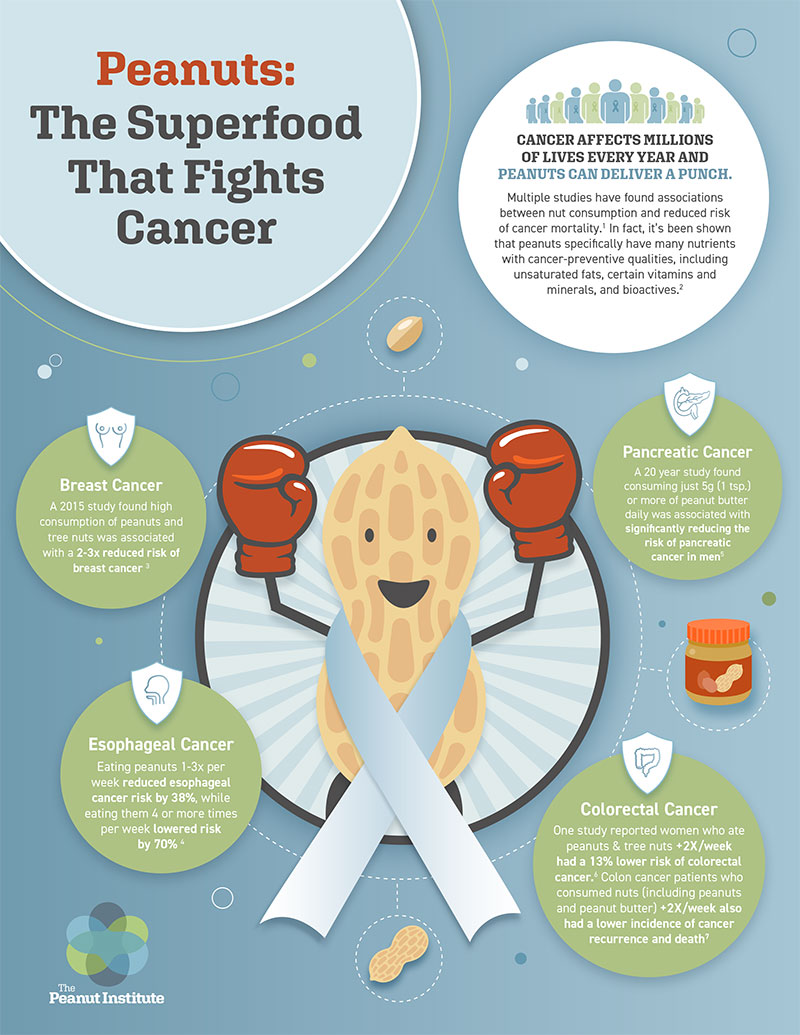 Cancer is the second leading cause of death globally [1]. The National Cancer Institute (NCI) estimates that by the end of 2021, there will be 1.9 million new cancer cases diagnosed and 608,570 cancer deaths in the United States alone [2]. Because of its far-reaching effect, experts agree that a focus on cancer prevention is imperative. NCI maintains that “a substantial proportion of cancers could be prevented,” and that about 42% of new cases are potentially avoidable [2]. Scientific research consistently points to diet as being a key component in cancer prevention.

While dietary patterns that are high in fried foods, sugary drinks, saturated fats, and processed foods increase the risk for many cancers [3], a diet that emphasizes plant foods like peanuts is protective against cancer [4, 5]. Plant-based foods are high in phytochemicals, some of which block the activation of cancer-causing substances and enhance the immune system [6]. In fact, over 25,000 phytochemicals have been identified as cancer-protective substances. Peanuts appear to be particularly effective in cancer protection because they contain a large number of these phytochemicals [7].

Some have wondered, “What about lectins in peanuts—do they have a negative impact on the development of cancer?”

Lectins are naturally-occurring proteins that are widespread in plant foods like peanuts, walnuts, tomatoes, cucumbers, and cherries. As with many foods and even water, consuming large amounts of lectins could be problematic. However, they are largely reduced in the cooking process. Further, eating plant foods like peanuts is consistently associated with reduced cancer risk, inflammation, and other positive health outcomes. You can read more about lectins here.

Research has demonstrated the potential for peanut consumption to impact cancer prevention. A 2020 study published in Advanced Nutrition showed a reduction in risk of cancer incidence and mortality with peanut and tree nut consumption [11]. Another study done in China examined dietary behaviors that impact the risk of esophageal cancer, which is ranked as the top 10th malignancy in China [12]. The study found that those who consumed peanuts 1-3 times per week reduced their esophageal cancer risk by 38%, and those who consumed peanuts 4 times or more per week reduced that risk by as much as 70% [12]. The Netherlands Cohort Study, which followed over 120,000 people for 20 years, showed that men who consumed just 5 grams (1 teaspoon) or more of peanut butter daily had a 47% reduced risk of a pancreatic cancer diagnosis [13]. Data from the same cohort study showed that peanut consumption also reduced the risk for a hard-to-treat strain of breast cancer in older women [14]. These and other studies agree with previous results that have highlighted the protective effects of peanuts. More research is needed to more fully understand the impact of peanut consumption on cancer risk, progression, and mortality.

The good news is that while cancer may be on the rise, healthy lifestyles that include plant foods like peanuts can help to decrease risk. Including this small nut may not only be a tasty addition to the menu; it can have a significant impact on cancer prevention.